Your browser is unsupported

We recommend using the latest version of IE11, Edge, Chrome, Firefox or Safari.

Please join Rho Chi in celebrating the 49th annual Albert Ebert Lecture with a key leader in pharmacy, William Douglas Figg, Sr., PharmD. Dr. Figg is the Senior Investigator, Program Head, and Deputy Branch Chief at National Cancer Institute. The title of Dr. Figg's lecture is "Don't Ignore Data That Seems to be an Outlier; It May Be the Key to Understanding A Disease.”

Students and faculty of all colleges are welcome.

In the mid-1800s, Albert Ebert shaped the emerging pharmacy field in the United States. Born in Germany, his parents emigrated to Chicago where Ebert took several apprenticeships before enrolling in the inaugural class at the Chicago College of Pharmacy (the precursor to the UIC College of Pharmacy) in 1859. Ebert finished his degree (after being interrupted by the Civil War) at the Philadelphia College of Pharmacy, and also attended the University of Munich. But the Chicago College of Pharmacy was always close to his heart, and upon his return to the States, he became the editor of the college's newsletter called, "The Pharmacist," a prototype of the early trade publications. Ebert was also a leader in the early pharmacy associations like the International Pharmaceutical Congress and the American Pharmaceutical Association (now the American Pharmacists Association, or APhA.) Ebert was so integral to the success of the Chicago College of Pharmacy that, when the school's books were lost to the Great Chicago Fire, it was Ebert who rallied alumni to donate the necessary books and supplies to keep the school running. 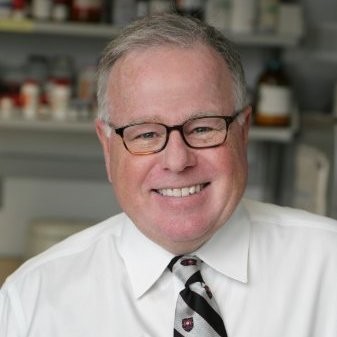 Dr. Figg received his B.S. (Hon) in Biology from Georgetown College, his B.S. in Pharmacy from Samford University and his doctorate in pharmacy (Pharm.D.) from Auburn University. He also has a dual MBA degree from Columbia University and London Business School. Following his clinical internship at the University of Alabama at Birmingham and his fellowship training at the University of North Carolina at Chapel Hill, he joined the Clinical Pharmacology Branch of the NCI in 1992. Dr. Figg became Head of the Molecular and Clinical Pharmacology Section the following year. Dr. Figg has focused his research on utilizing pharmacological principles in anticancer drug development and evaluating novel agents in the treatment of cancer. Dr. Figg serves as Deputy of the Genitourinary Malignancy Branch and on several committees within the NCI: Chair of the GMB Scientific Review Committee, the Medical Oncology Fellowship Steering Committee, the Drug Development Collaborative Committee, the Technology Review Group, the NExT Committee, the NIHCC Pharmacogenetics Committee, and chairs the steering committee of the Molecular Target Laboratory. He is on the editorial board of 19 peer-reviewed scientific journals (e.g., Clinical Cancer Research, Cancer Biology & Therapy, Clinical Pharmacology and Therapeutics, The Oncologist, Cancer Chemotherapy and Pharmacology, Molecular Cancer Therapeutics, and Pharmacotherapy). He has been licensed to practice pharmacy since 1988 (Virginia and Tennessee) and in 1991 he became board certified in Pharmacotherapy. He holds adjunct appointments at four schools of pharmacy - Samford University, Virginia Commonwealth University, University of Michigan, University of Florida, University of Arizona and the University of Maryland. Dr. Figg is also an Adjunct Professor at Columbia University's College of Physicians and Surgeons, Department of Internal Medicine, Division of Oncology. He has trained Ph.D. graduate students in collaboration with mentors from Oxford University, Cambridge University, University of Pittsburgh, University of Maryland, George Washington University and the University of Aberdeen. Dr. Figg is a fellow in the American College of Clinical Pharmacy and a fellow in the American College of Clinical Pharmacology. He was named the Allen J. Brands Clinical Pharmacist of the Year in 2001, the Association of Military Surgeons of the United States in 2003 gave him the Clinical Pharmacist of the Year award, and he received the 2005 Leon Goldberg Young Investigator Award from the American Society of Clinical Pharmacology and Therapeutics. In addition, he received the 2008 Russell R. Miller Award from the American College of Clinical Pharmacy and the 2008 ASHP Award for Sustained Contribution to the Scientific Literature. In 2009 he received the AMSUS Andrew Craigie Award for Outstanding Advancement of the Profession of Pharmacy. In 2011 he gave the Philip C. and Ethel F. Ashby Lecture at the University of Oklahoma and 2005 the Keynote Lecture at the World Pharmacy Congress. Within the NIH he has received several Technology Transfer Awards, Merit Awards, Director Awards and in 2008 received the NCI Outstanding Mentor Award. Dr. Figg has over 550 peer-reviewed publications, has patented over 80 novel anticancer agents and devices, and given over 150 invited scientific presentations/lectures throughout the world.